At Your Service…. a guide to XaaS

Home > Insights > At Your Service…. a guide to XaaS

Half the time, IT job specs can just be a jumble of letters and acronyms, with new ones popping up all the time.  As specialist IT recruiters it can be hard to keep up, and we will admit that there have been times a customer has asked for certain skills and we think they are pulling our legs! Cucumber, Snowflake, Kebab, MyMeat…..

In the last 12 months we have seen a rise in things being provided aaS – as a service.

SaaS (Software as a Service) has been around for a while, but now there are a whole host of XaaS solutions starting to pop up on job specs so let’s take a look at some and see what they mean…..

SaaS – Software as a Service – the oldest and the most well known of the list of acronyms. It is a way of delivering applications over the internet, you simply access software via the internet rather than installing and maintaining software. Salesforce is your top google link here.

IaaS – Infrastructure as a Service – a form of cloud computing that provides virtualized computing resources over the internet. Google gives you Microsoft Azure as top contender.

PaaS – Platform as a Service – cloud computing model where a third-party provider delivers hardware and software tools to users over the internet. Usually, these tools are needed for application development. A PaaS provider hosts the hardware and software on its own infrastructure. Azure again is top, followed by BMC.

BaaS – Backend. Backend cloud storage and processing for faster application development. Helps developers focus on their app’s features instead of spending time wondering how to scale.

Hard to get your head around – it can be. Here is a visual breakdown from Hosting Advice using pizza as an analogy for IaaS, PaaS and SaaS: 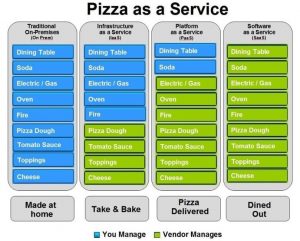 There are plenty others that are on the list but I’m sure you get the idea.

Whether you are looking for jobs or looking to staff – som3 will be at your service, maybe even with some pizza on the side.